Which do you choose?

Story by Sarah Carpenter, in collaboration with Julie Kaye

Before Julie Kaye was certified in any fitness instruction, she was a dancer dealing with chronic knee and back injuries and looking for a way to rehabilitate her body and get out of pain. She is now a certified Pilates Mat Instructor through Polestar Pilates International, a GYROTONIC® Level 1 trainer, Certified Lagree Trainer, and Barre Instructor -- to say she knows her stuff is an understatement. I asked her if she would spell out some of the things she encourages people to think about when choosing between the three machine-based techniques she teaches. If you’re someone who has been thinking about doing a machine-based fitness class, this article is for you.

Reformer Pilates, the GYROTONIC® method, and Lagree (Megaformer) are all mind-body movement methods that work to strengthen your muscles in a dynamic way, with support of an apparatus and with the focus on mindful movement. They target the full body and strive to create balance rather than solely focusing on one muscle group. 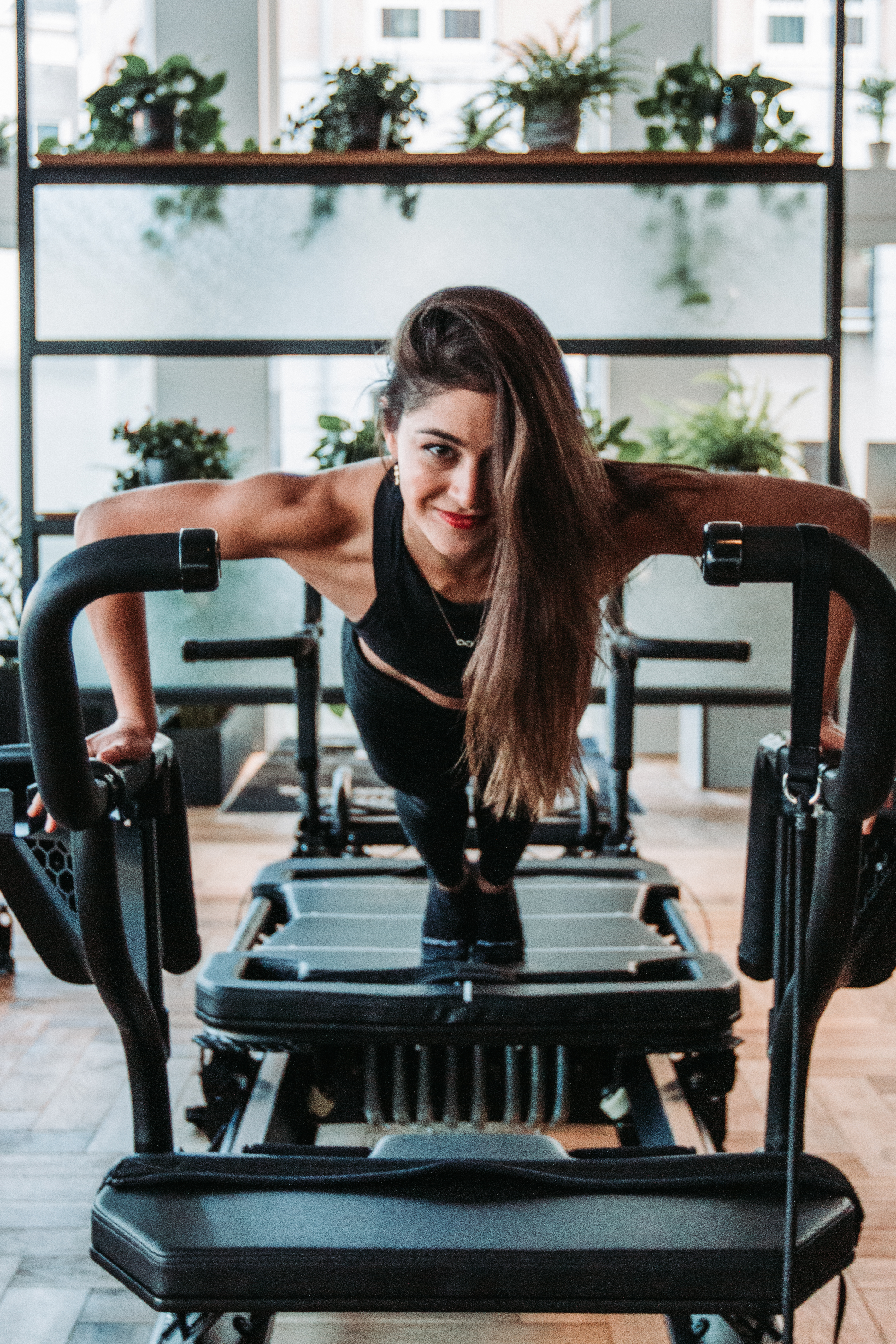 Developed by Juliu Horvath, a Romanian-Hungarian dancer who rose from starting dance at a late age to principal dancer status at the Romanian National Ballet in just three years time. He later went on to dance with the New York City Opera, as a guest at the Radio City Music Hall, and finally became a principal with the Houston Ballet. His story includes defecting from Romania and living as a refugee in between these jumps from company to company. He eventually ruptured his Achilles tendon and moved back to New York where he began to practice yoga. His move to St. Thomas in the Virgin Islands was where he began to practice meditation and focus on healing. Once more, he moved back to New York, where he developed the GYROTONIC® and GYROKENESIS® methods.

The GYROTONIC® method shares with Pilates the focus on moving in coordination with the breath, but the movements of the GYROTONIC® method tend to be more fluid, flowing, and circular – almost like dancing. The machine allows for 3D spiraling movements, and it’s unique pulley system allows these movements to be made without putting pressure on the joints – it gives a feeling of weightlessness. This technique is great for people with arthritis, dancers, and athletes who are involved in rotational sports. Due to the complexity of the movements, you’ll more likely do this method in a one-on-one setting, especially when starting out. Because it is not yet very mainstream, even the group classes tend to be on the smaller side (4 machines in a class). This makes the GYROTONIC® method a more expensive technique.

Who can do these methods?

Can you do them if you’re pregnant? You bet!

Can do you do them if you’re injured? Yes! Absolutely. Use these as sources to heal and get back on your feet.

Developed by Joseph Pilates. His journey towards fitness began at a young age as it is said that he overcame asthma, rickets, and rheumatoid fever to become a gymnast, diver and skier. He continued with this exploration of movement for rehabilitation during World War I when he served as an orderly. He used a very rudimentary system of springs attached to beds to work with people who couldn’t walk. This machine system is the basis for the Pilates reformer.

The method became popular with dancers very quickly, and he continued to improve on and add to the method with a group of dedicated students who later became known as the Pilates “elders”.

Pilates connects breath, mind, and movement, and is a full body workout. The reformer works on spring tension, and in this way it also provides support to the joints. The exercises on the pilates reformer are very linear, especially compared to the GYROTONIC® method.

Pilates on the reformer can be taken as a private lesson, a duet, or in a class setting of up to 10 machines in one room. 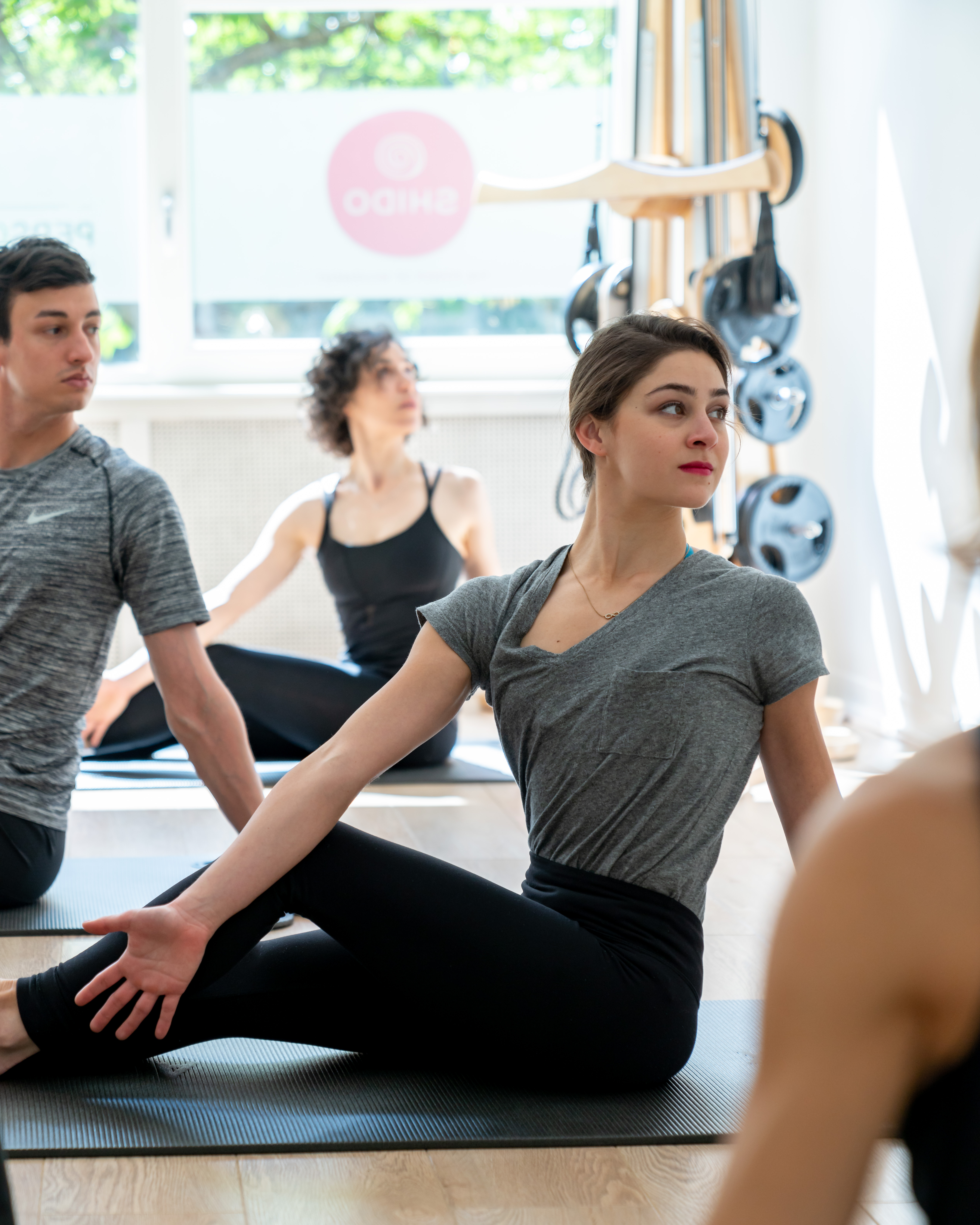 Developed by Sebastian Lagree, French-American Fitness trainer and inventor based in LA who wanted to maximize the efficiency of a workout through the use of the Megaformer, a machine he developed. The Megaformer functions similarly to a traditional Pilates reformer, but has been made easier to use, more versatile, and more comfortable.

This technique is about sculpting bodies and creating a lean physique through prolonged “time under tension”. The emphasis is on engaging slow-twitch muscle fibers and working the endurance muscles to fatigue/failure.

This not only creates a long, lean look, but it is also useful for cross-training, increasing muscle strength after an injury, and improving posture.

Lagree is typically taken in a group class setting of 10-15 machines in one room, and classes are shorter as the focus is on getting an efficient workout.

This is the most affordable of the three technique’s Julie teaches.

Start by taking these methods as 1:1 classes if you’re a beginner. That gives you the ability to have full attention from your instructor.

Commit to each method long enough to be able to do them properly. You need a consistent amount of time and effort to make a decision about whether it’s working for you or not. Nothing worth doing gives overnight results.

If you’re not enjoying an excerise, try something else! You won’t see results if you don’t enjoy it.

Expect to be confused at first, but stick with it. After you understand the basics, things will fall into place.

Don’t expect to tune out or go on auto-pilot. All of these movement methods are about control, form, body-awareness.

Understand that these methods are about the slow burn. They strengthen and lengthen muscles, balance out the body, and can increase metabolism by raising your Basal Metabolic Rate. While you may tap into some cardio benefits, if you’re looking for intense cardio in your life, compliment your training with brisk walks, running, cycling, swimming, etc. 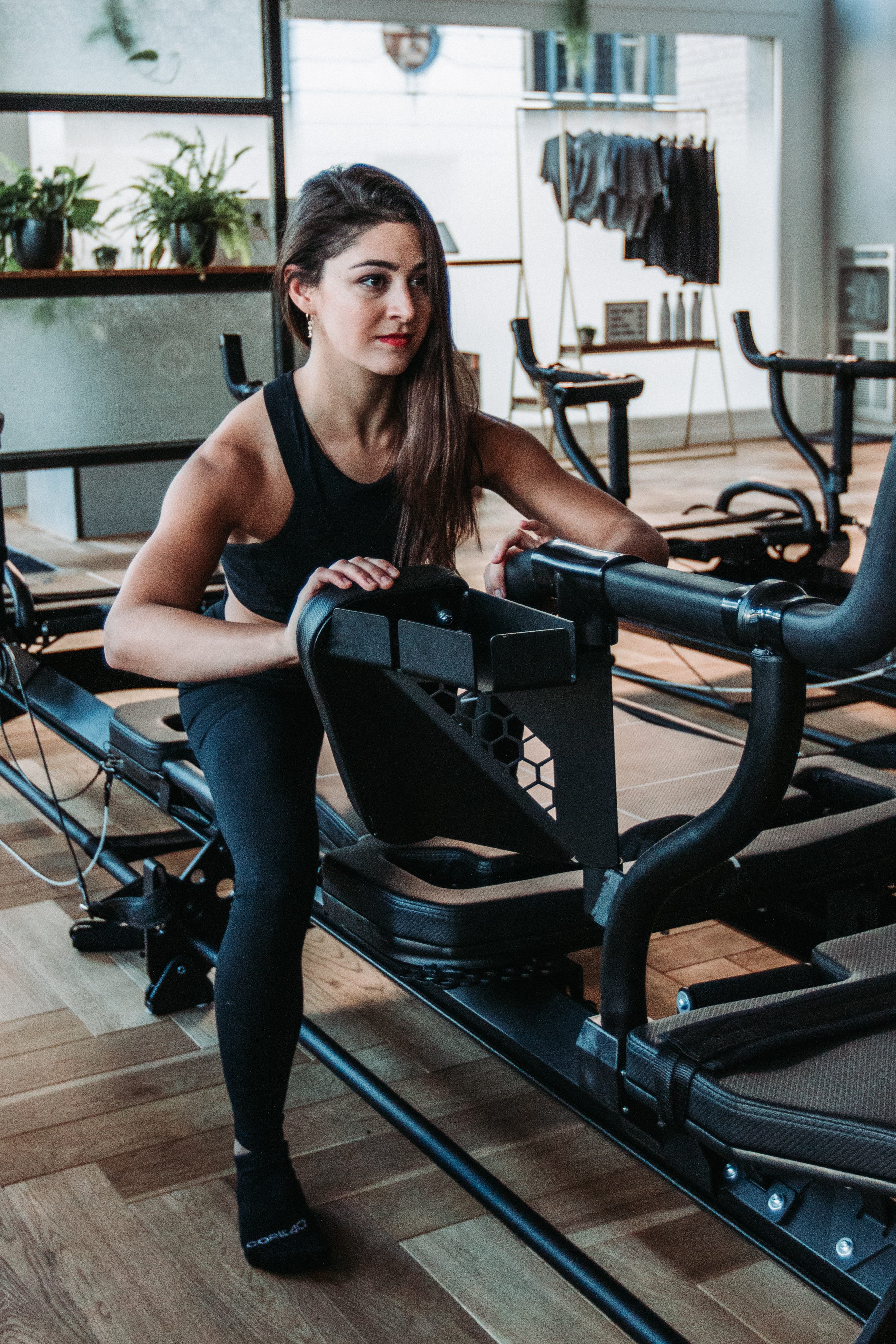 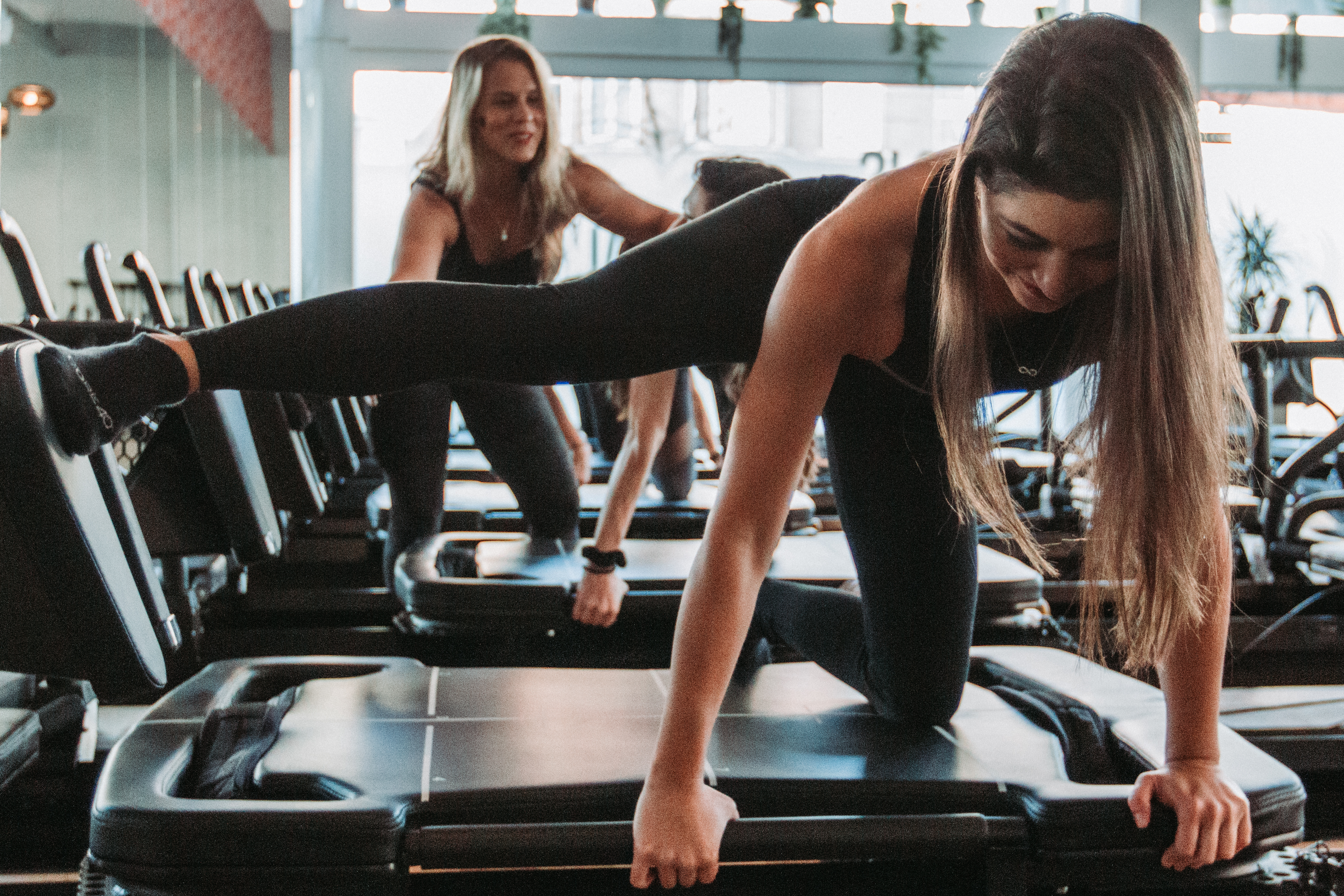 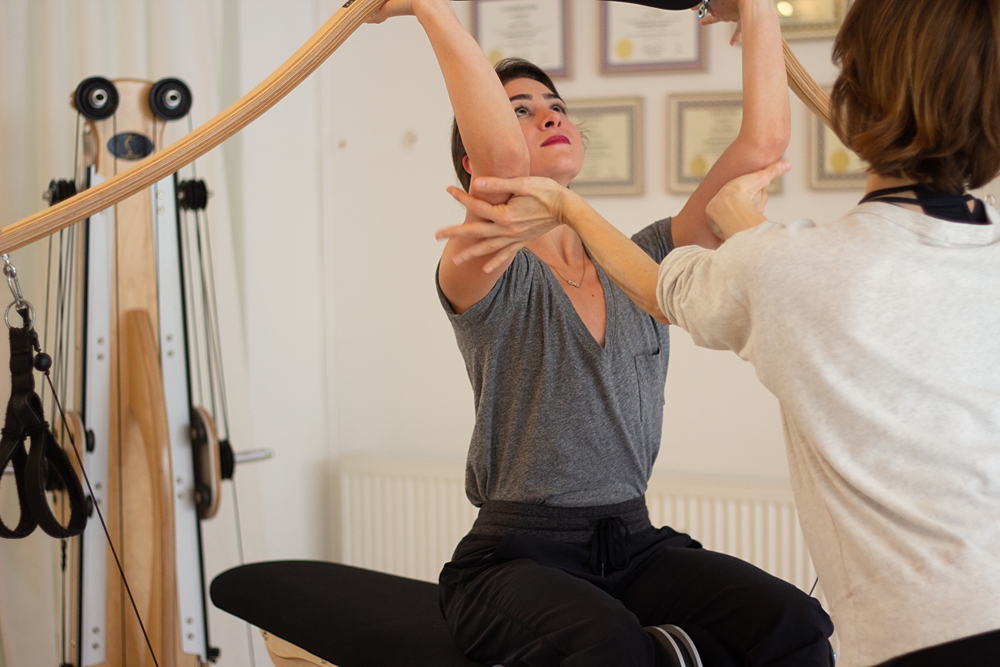 “THE MAN BEHIND THE MACHINE.” Sebastien Lagree, www.sebastienlagree.com/.

Julie Kaye has a BFA in Dance Performance and BBA in Management from Southern Methodist University. She is certified in Polestar Mat Pilates, is a certified Lagree trainer, a certified Barre trainer, and a certified Level 1 GYROTONIC® trainer.

Where you can take classes from Julie: 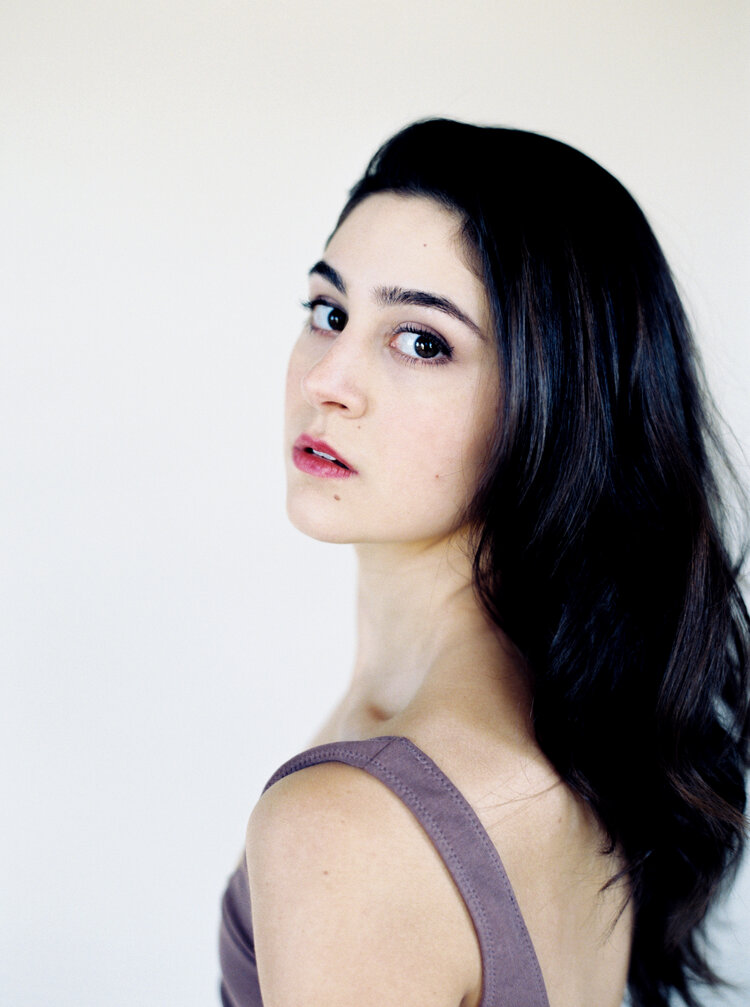 GYROTONIC® and GYROKINESIS® are registered trademarks of Gyrotonic Sales Corp and are used with their permission.